Due date when moving subtasks to main tasks

Hi. When dragging and dropping a subtask into a smartlist, is there a way to make it either hold the due date from the original task, or pick up the date of the smartlist into which it's being dropped?

For example, I'm trying to pull a subtask into being a regular task in my smartlist that holds items due tomorrow. It does come out as its own task, but even when dropped between two other tasks that are due tomorrow, it loses its date info (and the task for which it was a subtask also had tomorrow as a due date).

Hi @Fuchsia, thanks for the feedback.

Normally if you drag and drop subtask between tasks to make it a task, it should fetch the related data. Do you have 'Due date' set properly on 'Sort options'? Sort options will be used to check which values that new item will have.

Hi. Thanks---this is what I have set right now. Anything I can adjust? 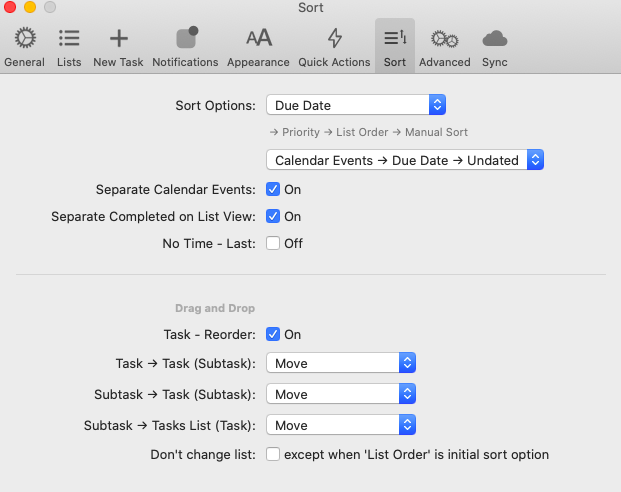 Option seems to be ok. I find some bug on 'Move' option but even though, due dates should be added on newly added task. Please send me some screen recording to contact@hahaint.com