I'm having issues with iCloud sync of preferences to/from the MacOS version. (Note I'm only talking about the preferences: syncing of reminders, including list creation/deletion, with Apple Reminders and across all devices is seamless.)

I use GT on my iphone, iPad, iMac (running 11.2) and MacBook Pro (running 10.15) . Preference sync between the iOS versions is perfect and virtually instant. However, the MacOS versions don't 'see' changes made on the iOS devices, and changes made on either Mac don't get synced elsewhere. I've tried uploading preferences from one of the iOS devices (where I have GT set up as I want) and then downloading on the Macs, but it doesn't make any difference. Uploading from the Macs doesn't go anywhere end up making any difference anywhere. They still show the latest sync as only with themselves.

It feels as though the Macs are sending their data to a different location in iCloud rather than the one that the iOS devices are sharing. However, when I dig a bit deeper by looking at the GT folders on iCloud Drive, if find that those folders aren't syncing. If I go into iCloud on Files on the iPad, the folders and .plist files I see in there are different from what I can see on the Macs (which are different from each other). (see screenshots below) This explains why Today doesn't sync either – those folders aren't the same either.

So bottom line is that iCloud is working generally (e.g. for reminders, etc.) but it is not properly syncing the Goodtask folders from the Macs. Any thoughts on why this might be happening? 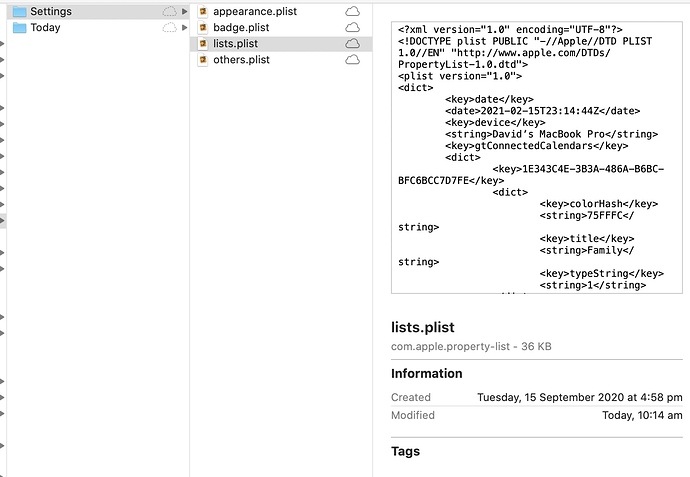 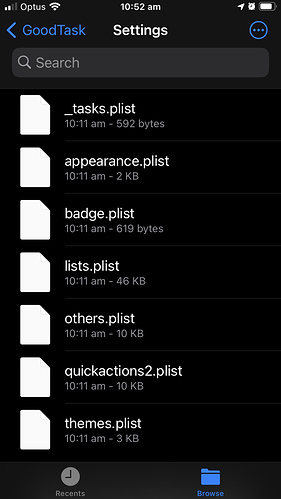 Thanks for the feedback.

Since settings are synced through iCloud Drive files, it can get stuck like your situation.

According to your screenshot, cloud icon with proper line should mean that all are synced well. If the time doesn't match with the one on your iPhone, you may want to restart your Mac and see how it goes.

You may also try adding file on your iCloud Drive folder to check if it syncs and give a trigger.

Thanks. I fixed it by, first, copying the correct settings into the GoodTask folder on the Mac, which brought across those settings. Effectively a manual update. However that didn't free up iCloud sync (which I stress is not a GoodTask problem). After turning off iCloud Drive sync in iCloud settings on the Mac, then rebooting and turning iCloud Drive back on, it seems to have sorted itself out for now.

Thanks for the quick feedback. Good to know GoodTask is robust enough to deal with a manual settings override if it comes to that.